Picked a direction... or two. Now to back to the rear again. 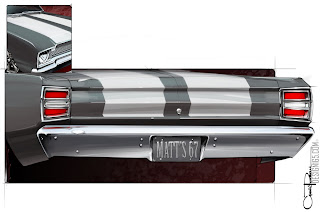 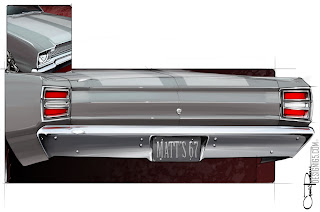 One of the blogs I frequent is Speedhunters.com While not exactly hot rod-centric, I love that they cover most aspects of modified car culture. I came across a recent post about Mooneyes Streetcar Nationals in Tokyo. For one, I totally respect anyone that takes on the massive pain in the butt that it must be to work on an American car outside of America. It's hard enough to find parts for these old jalopies here, never mind on the other side of the world. But even seeing the American hot rod and kustom influence when applied to non-American cars is something that I find super cool.

Anyway, here's some pictures I lifted from their coverage.
For the full post, go here.

"Barn Find" is one of those terms that seems to have become one of the most overused keywords in old car ads over the past decade. Perhaps it's the fact that in today's world, it seems like the only chance you have to find some untouched piece of automotive history, is if it's been sitting in a shed behind some recluses farm house for half a century, which oddly enough, is the story in many of these cases.  However, the phrase "Barn find" comes up in every ad from an 80's Camaro to a $30k finished hot rod. Regardless, I still like to use it as a keyword in my never ending search for fun stuff that I don't need, and every so often I come up with something that aptly fits the description.

So I'm gonna start posting "barn finds" hopefully once a week. Unless I state otherwise, I have no knowledge of these cars beyond whats said in the ads, or their owners, and I'm not trying to vouch for anything said in those ads... I'm just a hunter. "Barn Find Friday" sounds better than Barn find Thursday, so I'll post a find every Friday.... but i just thought this stuff up this morning, so give me a break. :)

Anyway to start it off with, check this out:
A 40 Ford Deluxe Tudor, 46 Flathead, mostly complete, & off the road since 56. I could be wrong, but the price seems reasonable too.

Rear thoughts on my 54

Just some thoughts about what (if anything) I want to do with the rear of my car. Regardless of whether or not I go the heavy fabrication route, I will definitely do a few things, such as relocate the filler door, smooth out and tuck in the bumper, and deck the trunk lid, but i figured I'd throw down some "what if" lines. 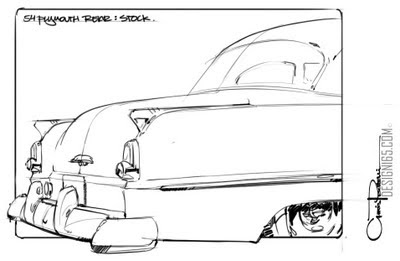 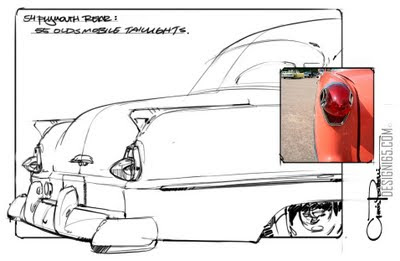 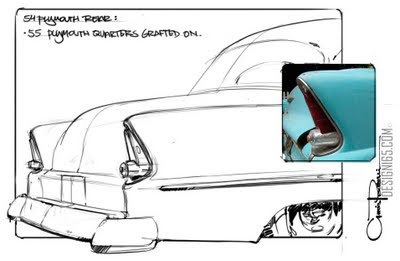 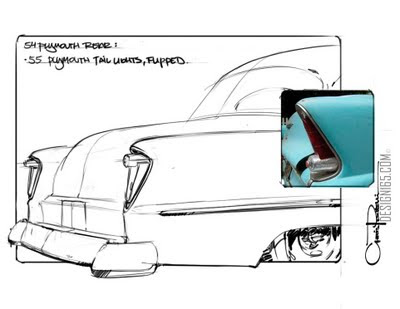 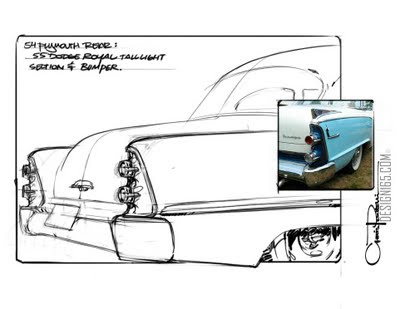 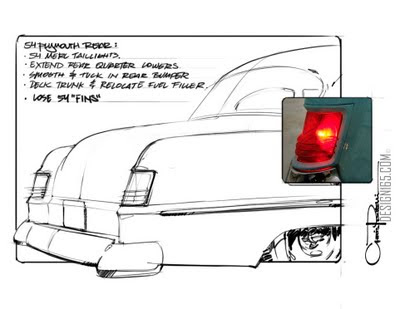 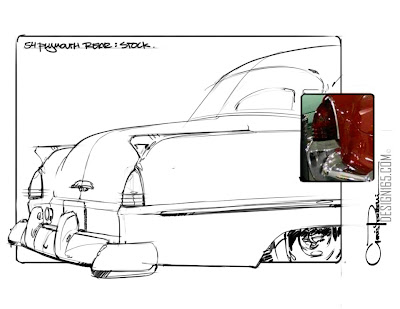 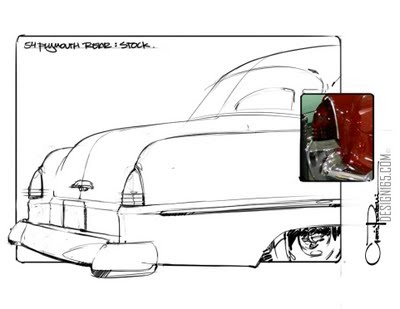 More stuff from my travels.

Back in '03 when i was living in southern Ca, a buddy of mine told me about some old GM built show buses hidden away behind a shop about 45 minutes from where we worked. At the time, I'd never heard of the GM Futurliners, (and this was 3 years before a restored one showed up at the Barrett Jackson auction and pulled bids in the millions.) So never having seen one, when we took the trip to check em out, I was floored!  These things are crazy! Talk about a bold statement. Dual front and rear white wall tires, centrally driven, custom designed, monsters that toted examples of never before seen technology while traveling from town to town across the country.

A little history from FuturLiner.com:
"Twelve Futurliners were built and used by GM to transport the GM Parade of Progress show throughout the United States from 1941 to 1956. The Futurliners transported dioramas and exhibits, featuring futuristic things such as: a microwave that fried an egg without burning a newspaper; a Ping-Pong game in stereophonic sound and; sound traveling over a beam of light produced by a flashlight.  The Futurliner is a massive bus like vehicle, 33’ long, 8’ wide, 11’-7" tall vehicle with a whopping 248" wheelbase. An unusual feature of the Futurliner is its dual (side by side) front wheels. Each wheel has its own set of brakes, brake drums and bearings."

Anyway, here's some pictures of the one's we got to see. The shop owner was a pretty cool guy and let us take a close up look at the two that he had. As the story goes, at some point during the tour, while traveling through Utah, the brakes went out on one of the trucks and it ended up rear ending the one in front of it. Apparently the one it hit was taken out of commission for the remainder of the tour, after which they were all decommisioned. The damaged truck, along with another of the few existing survivors was what we found sitting behind the shop. I guess the game plan was to turn one into a car hauler. I'm not sure what the plan was for the intact one. Check out these pics though... these trucks are wild as hell. 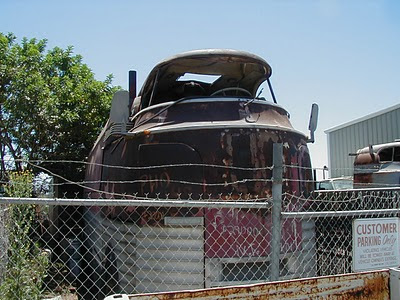 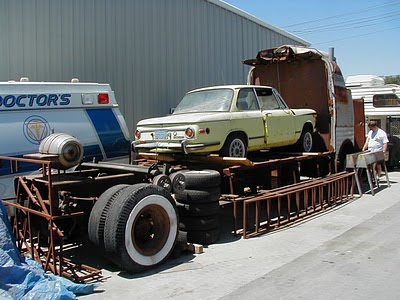 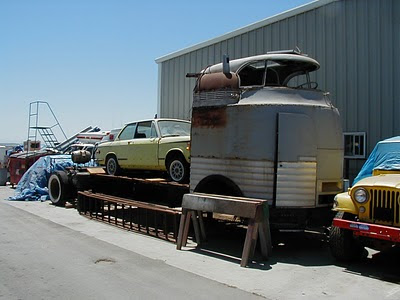 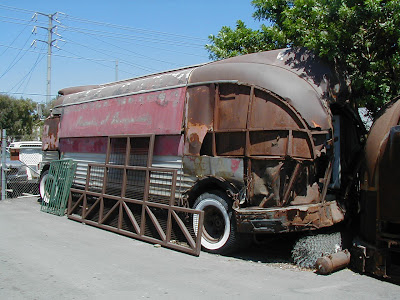 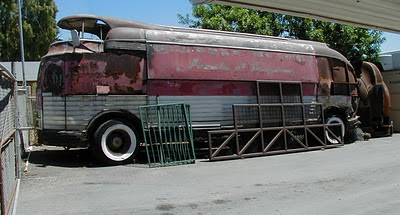 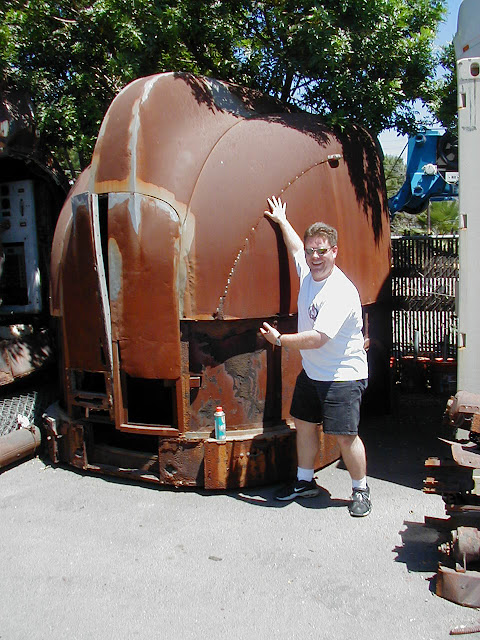 My buddy Terrence was as geeked as I was. 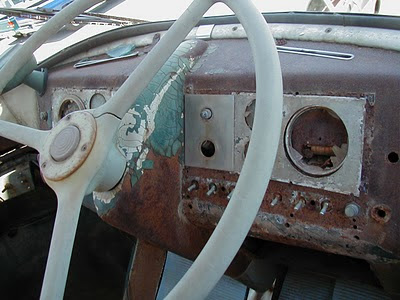 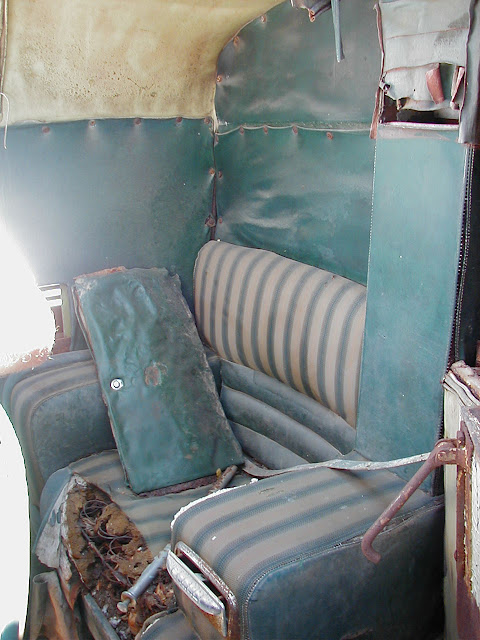 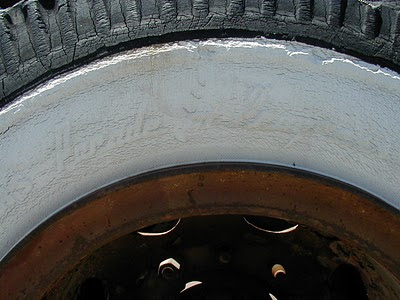 It's hard to make out, but imprinted on the immense white wall tires was "Parade of Progress"
-Custom tires... like every other detail of these trucks... totally one off. What a crazy find.
Like I mentioned, I don't know what the dudes plans were with the complete one, but it wouldn't surprise me if he put it up for sale after hearing the crazy numbers that the other one pulled a few years later.
Posted by Design165 at 7:59 AM 1 comment: 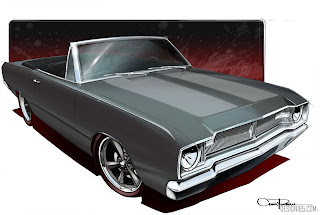 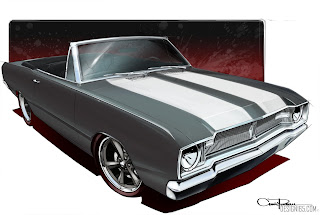 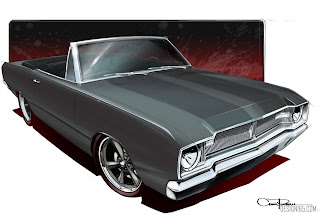 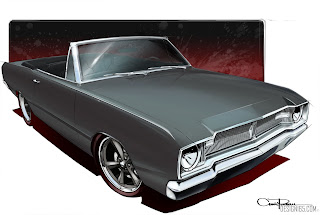 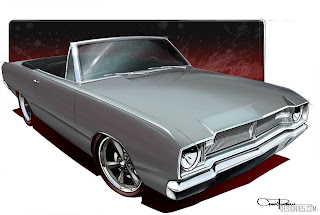 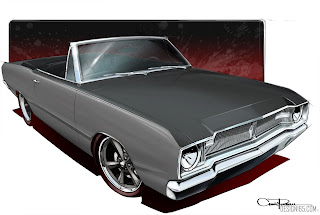 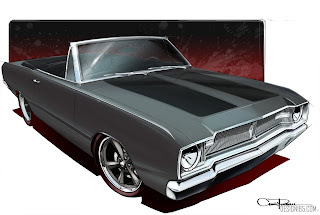 Unrelated to anything, I was digging through my closet last night and I came across a tube containing a huge original "Death Race 2000" movie poster that I bought years ago. Buying it was definitely a bachelor decision, seeing as I don't think the soon-to-be wifey will find the poster nearly as cool as I do. (Mine is the Italian release: "Anno 2000 La Corsa Della Morte" if that classes it up any?) ...Not so much.

Anyway, if you've never seen it, you owe it to yourself to get your buddies together, go out and grab some low quality beer, and enjoy one of the worst 70's B-Movies you'll ever see. It's amazing, and terrible, all wrapped in a ball of awesome.

Tying art back into it, I bought the poster not only because the movie rules so hard, but because I love early movie posters, especially illustrated ones. Seeing as my marital status is about to change, this one will most likely end up in the garage instead of the living room, but  it'll always hold a special place in my heart... right next to all my other car related junk that my girl will never understand. :)

Some auto portraiture I just finished up for Mike, who's finishing up the "Motor City Deuce" as we speak. 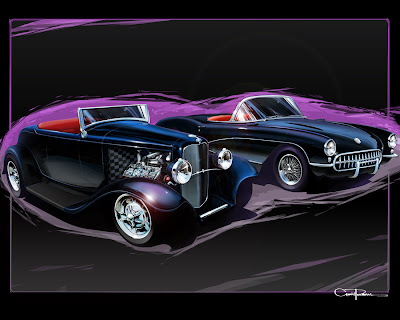 The finished car is going to be gorgeous, which is no surprise given the quality of his 57 Vette. Here's a sneak peak at the mill. I'll post pics of the car as soon as it's complete 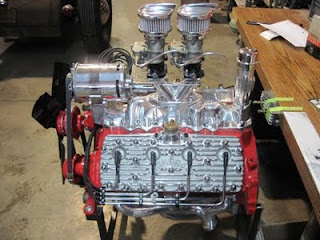 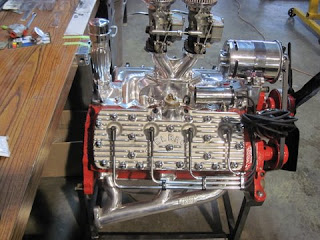 Well, thankfully for my wallet, I'm nowhere near completion of my '68 Imperial Coupe, so this issue isn't an immediate one, but I cant help myself from wondering about wheel selection.

Originally I was hot and heavy for a set of 20" Centerline California Smoothies.  The car is a monster, so where normally I'm not a huge fan of giant wheels on older cars, that diameter would probably fill the wheel well out nicely, while still allowing me to run a decently meaty tire, and not have to run rubber bands.

Now, I don't know whether it's because I've been getting more interested in the early low rider scene over the past few years, or that I just think that high roller cars like Imperials need wires, but recently, I started looking at other combos of wheels. I like good ol' Supremes, but they don't work on this car. I also love Kelsey Hayes Chrysler wires, but they look more at home on  62 and earlier Mopars.

Then I found these:

They're Cadillac wire wheels. The difference from KH Chrysler wheels is subtle but definite. A few companies make reproductions and I figure I could swap Imperial center emblems in.

All said and done at this point, the most important thing is to reassemble and reinstall the engine, and get the car up and running again.  I personally hate the stock 68 caps, but I really like 64's so that's what I'll be running to start  with.

Some rough idea sketches for a shop the specializes in Euro roadsters and early sports cars.

Another old scribble from back in the day that was worth saving.   :) 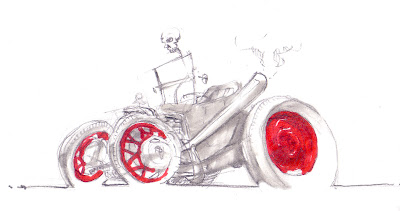 I didn't make it down to LSRU X this year, but I did spend some serious time on the internet drooling over some super nice rides while being jealous that it's sunny and warm elsewhere in the world.

Here's some cars I that thought were particularly interesting (all photos lifted from various show coverage posts on the H.A.M.B.)

Ok, so it's not a car, but wood boats + fins = instant awesome in my book.

I really dislike chameleon color flop paint, but given the context, I'm not as annoyed by the paint on this car as I thought I would be...

Seeing pre-53 mopar customs done tastefully is somewhat of a rarity given the cars' clumsy proportions to begin with, so with the exception of the cliche caddy taillights of which i'm not a fan, I think this car is pretty successfull.

Some other eye candy: