Well, I didn't really find any earth shattering barn finds for sale this week, but I did come across this thread on the HAMB which is pretty cool. I think all of us can relate to dreaming about opening an old dude's garage to find a solid old beast of one sort or another. Turns out that this guys "barn find" was in the family. Looks like gramps was putting 'em away for some time. On first look, I thought he just pulled the 49 coupe out, but as I read on, I realized it came with a 51 Fleetline and a 57 pickup! My buddies would hi-five me...and my wife would kill me in my sleep if I brought home a score like that.

If you dig the culture salt flats competition, and you enjoy history as well, then this upcoming film about David Jenkins might be right up your alley. I watched the preview, and now I'm hooked... I hope it hits some of the independent theaters around here because I will definitely be going to see this one!

For a more in depth synopsis, check out the  official site: Boys of Bonneville


Boys of Bonneville Movie Trailer from Price Museum of Speed on Vimeo.
Posted by Design165 at 10:26 AM No comments:

I'm torn this morning.  There were a few cars that I could have posted today. Namely there's an original looking deuce coupe on CL that's been off the road since 1963.  But part of it being a good find is that it's also a somewhat decent deal...and at a $30k asking price, the deuce was just too rich for my blood.

So I give you this... A lowly ol' Dodge. The chrome around the windshield makes me think it's a Custom, which was the more expensive of the line up. Title says it's been in storage since 64. It needs a lot of love, but for $500 with no reserve, it looks to be a great starting point for someone who wants a fat fendered car, and doesn't wanna shell out the big bucks for a FoMoCo project of the same condition.

Thoughts on a 54 Chrysler.

I sketched this up for the fun of it a while ago and wanted to submit this to R&C for their "Dreamcar of the month" segment, but since I haven't heard back from them, I guess I can show you!  Here's my thoughts: 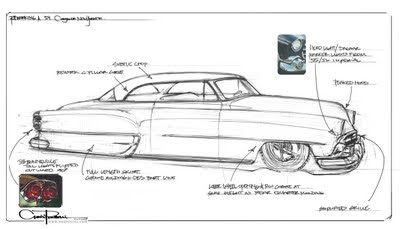 I decided to take on a '54 Chrysler New Yorker as a starting point for a sled. Not the most common kustom fodder, I know. But with Chevy's of the same year being the object of so many peoples chopped smoothed and tail dragging fancy, I decided to switch it up.
First things first, that top has to come down, but lets keep is subtle. Lets say 2.5" in the front and 3.5" in the rear. While we're at it, I would rework the C pillar/quarter window opening to get it to flow with the new roof lines a bit better. The hood would get peaked and loose a couple of lbs of chrome. A simplified stock grille would be flanked by frenched '55-6 Chrysler Imperial headlights as well as marker light bezels. Taking a cue from Cadillacs of the same era, I lowered and reshaped the front wheel wells and aligned the side trim to match the quarter trim height. The rear skirt would be a full length quarter skirt, separated where it meets up with the lower edge of the trim. To spice things up out back, I elected to use tail lights donated from a 58 Pontiac Bonneville, flipped 90 degrees outward, and grafted to mildly extended rear quarters. Some of the old tricks are a must, such as losing  handles and hiding the bumper bolts. Kelsey Hayes wires would look good, but in keeping with a late 50's style I chose to run caps, on wide white bias ply tires and since the original '54 caps look close, (but not too close) to the popular "Lancer" caps of the next year, I think they'd be a cool item to keep. Finally, for colors I chose a light apple green with a pearl white top and interior.
In 1954, all New Yorkers came off the line with 331 hemis, and finding some shiny dress up goodies shouldn't be too much of a problem. Personally, I wouldn't mind seeing a pearly white engine bay with the matching color on the mill, smoothered in chrome and wearing a 2x2 manifold up top. This won't exactly be running quarter mile passes after all.  So, in conclusion; a project for the faint of heart? Not exactly, but a swan in ugly duckling attire, just waiting for a second chance to shine? You decide!

Now, technically, this isn't a "find" as it's already been "found," and since cleaned, and worked on a bit, but as far as cool points go, this thing is killer.

Old school go-fast components? Check.
Off the road and hidden away for a long time?
Check. Odd/rare factor? Check.

I've stated before that I dont know the sellers of the F.B.F. cars that I post. I just search every week and try and post the most interesting car, though oddly enough, even though I found the car using the same search that I always do, I actually do know the guys selling this, as I've done some work for them. I cant speak for the car, but i can speak for the shop; Definitely some good dudes.

I came across this video quite by coincidence. I was watching another webisode of "Depths of Speed" about a dude who restores JDM classics and saw this video in the side bar. Aside from being a cool profile and a well done video, I was kind of geeked to see Lon's 36 Roadster in the background! (For those of you the haven't followed for that long, I did the design work that led to the build of what will be a bad ass roadster from what was at one point, a wreck of a 4dr sedan. I've checked in from time to time on the build of that car, and can say that Chris' metal working skills are nothing shy of art.


All the Hypebeast vids are cool, and even if you aren't into the specific subject matter, you should still be able to appreciate the quality of production, and the content as well!

havent seen any phenominal "Barn Find" ads this week, but i did score a little bit of a find myself.

It's a McCulloch Supercharger. This one is a "D.O." unit, which replaced the VS series. It came with a bunch of goodies as well, like the column mount gage pack, which is a pretty rare item. As much as i'd like to run it, this stuff is gonna be up for sale, so I can put the money towards stuff I actually need. :)