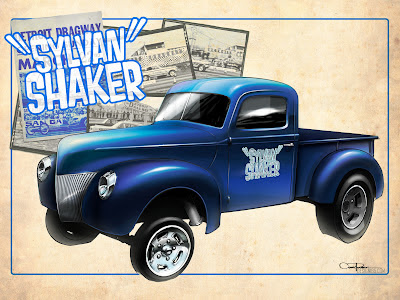 Yeah it's as random as it sounds. The car's in rough shape, and it looks to have a later model nose grafted on.. but when I saw it, I couldn't help but think how bad ass this thing could be!

Full Thread on the HAMB 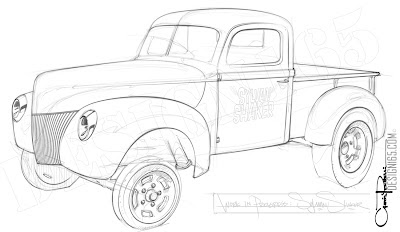 Some photos taken by my good friend Leon while we were wrenchin in the garage over the weekend.

My friend, and fellow artist Mark Weaver just sent me this and I've watched it like 5 times. Amazing to think about what a time when this was what you saw from inside of your automobile. :)

I just received a new charger to replace the one that i somehow lost for my little point and click, so I was able to upload the photos that have been sitting on it since it died a few months back... of which these were a few.

I'm getting closer and closer to getting my 68 Imperial back on the road, and as I compile all the parts that came in it, (I bought it as a failed project attempt) I'm starting to realize that there are parts that I have no idea as to where they go! On one of my many weekly CL searches, I came across an ad right here in Detroit for a 68 Imperial. There only a crappy cell picture, and very little verbage, but i figured I'd go under the guise of being interested, and snap some shots of the complete under hood so that if nothing else, I could get a road map of what goes where on some of the mystery braces and harness wires that I have for mine. After hunting the car down in the crappier side of Hamtramck, I met the the owner and learned the story of the car in the little cinder block garage in the alley. I guess it belonged to the owners father, and was original. Being a LeBaron, it was loaded, but unfortunately, sitting for the better part of a few decades had taken a pretty serious toll. The whole lower body was mushy, and the motor (at least the top end from the little bit of digging around that did, was frozen up. Still, I figured for a parts car, it'd still be worth it's weight in scrap. Well the dude wasn't a car guy, and had no idea what condition had to do with a cars "value" so when his "make offer" price turned into "Well I figure it's well worth $2500" I decided it's probably be better for both of us if I kept my mouth shut about what it's worth to me...which was in the hundreds, not thousands. Alas, the point of me going out here was to take pictures after all (I have a bad habit of letting things get sidelined) so I busted out the camera, started taking shots, and... the battery died. Uggh.

I told the guy to call me if he ever decided he wanted to sell it for parts, though I never heard back, which I'm not surprised at.  An interesting day anyway.