Well, another year has past, and I have to say that this years Autorama show was one of the best ones yet! (At least as far as the basement level that housed the traditional scene was concerned) The upper level, for all of it's crazy gloss coated, strobe lit, overcrowded glory did have some nice stuff. A few cars were in fact gorgeous, and tastefully done. Honestly there was a lot of nice stuff as far as craftsmanship was concerned, though some of the design of the cars/builds left me wondering what went awry. Perhaps the fact that it's my day job to be picky about design that makes me a snob, but so see things like a car that cost well over a half a million dollars to build have poorly fitting crooked exhaust, or wheel choices that looked like they were right off the Pep Boys shelf made me kind of frustrated that details like that were overlooked.
Alright enough of my rant about high-dollar low-thought rods. This year the downstairs went full traditional, which was a great move that was proved by the immense amount of traffic that I saw for my booth at the rear most corner! For those of you who have never been, it's been split in previous years between the trad scene and the tuner scene. Unfortunately, do the the fact that the tuner scene was never properly marketed, or perhaps that there's just not as big a following here in motor city, it was always pretty dull, and quiet in comparison with the hot rod side, that has been busting at the seams in recent years. This is also the first year that it was opened up to a few of us artists to display and sell our work. It was a great opportunity to showcase some work, and I finally got to meet some of the guys that I have only read about or communicated with online.
Here's a few highlights and follow the link to see a slide show (about 180 photos) that i took throughout the weekend!
Autorama 2011

I'll be headed down to Detroit later to set up my booth for this years Autorama, and I was reminded of the last time I took that trip in the 54.  The car made it...for the most part, though it blew out the rad and spewed anitfreeze all over the floor which I robbed the bathroom of 120 ft of paper towell to clean up, and I managed to lose a bullit lug cover on the ride down... gotta love detroit roads.
Hopefully, since i'll be driving my daily driver, there'll be less hiccups this year!

Recently Ed Tillrock got in contact with me about doing a piece of artwork focused on the "Little Honker" nostalgic Bantam dragster to be auctioned off at this years Autorama Charity Auction. Most of the artists that are showing this year did a piece, which i think is a really good idea and a for a good cause as well.
Here's my submission: 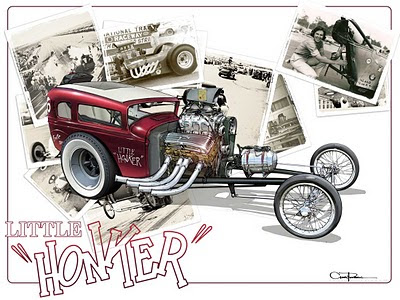 Signed 13x19 high quality prints can be purchased on my webite store:
Check it out!
And some of the other guys:
Todd Jones:

Lots of talent and a great variety. I'm super excited for the show!!
Posted by Design165 at 8:47 PM No comments:

I love hand painted lettering. From script to block lettering, it all but represents a dead art. I saw this last time I was in an old Junkyard in PA.. Even though it's not the coolest I've seen, I still had to fight the urge to ask what it would take to come back and cut it up. :) 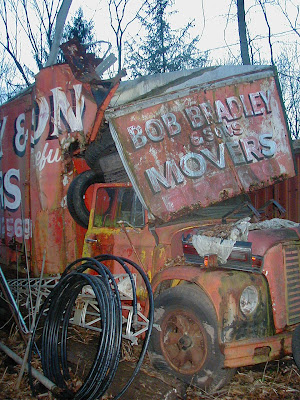 My Dads garage in NJ... and you think I'm bad about too many projects.

FlatCad Racing Stickers.  Be on the lookout for them on the FlatCaddy website soon! 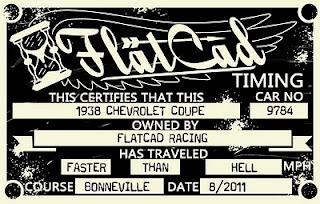 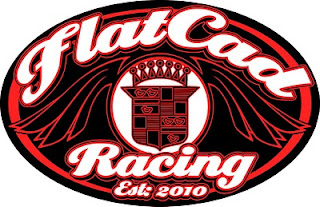 Just finished this second piece up for Chris of his fathers pickup. It goes along with his 65. 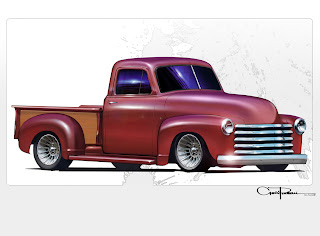 I'll admit it, I like show-rods. Silly and oft times useless as they were, there's a certain 9 year old kid side of me that digs the completely over-the-top nature of these dramatic, gloss and chrome caricatures of themselves. Ed Roth's earlier cars are some of the best of this class. The Beatnik Bandit, The Outlaw, and The Orbitron are all good examples of the crazy one-off  toy like creations that I'm talking about.
When the newest Roth-mobile (the "Streetnik Bandit"created by the late Icon's son) was previewed at the 2010, I can't say i got the same vibe. Between the quad square headlights, the amorphous body that looked somewhat like a stretched, but melted Beatnik, and the blue lazy scallops over cherry red paint, this car lacks a certain... lets call it cohesiveness.
So i took a quick crack at it. The idea was to keep the general shapes/theme but make the car flow a bit better proportionally. I also played up the 60's feel, because lets face it, the 90's vibe isn't working, and the 60's was the heyday for this type of monster anyway. 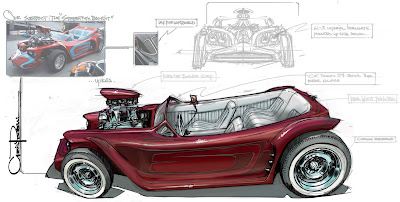 Just got my stickers in from StickerGuy.com and I'm geeked! 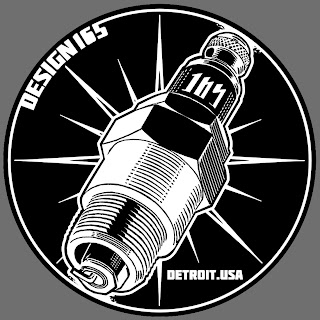