There are still good folks out there.

When you buy and sell stuff all the time, you tend to run across a lot of shady people. You hear about it all the time; Craigslist scams, EBay sellers that purposely give vague descriptions to avoid actually telling you about something's condition, or buyers that are looking to screw you out of your stuff. You can get pretty jaded. It's not often that you hear stories about good people... it's even less often that you get to do something about it. Here's my quick story about one such person.

Back in March, I decided that it'd be cool to rock some Lincoln Premiere caps on my 54, so I found a guy on Craigslist down in OH that had a set for sale. I called him, we spoke and he told me that he actually had 8 caps, and that for the price we agreed upon (which was very reasonable) he would send me the nicest 4 of the lot. I got the feeling that he didn't know they were a custom car fan's wet dream, more that they were just nice old caps for someone with a '56 Lincoln. I sent a check and he sent the caps....which is where things started to go awry. I received the box about 3 days later. When I opened it up however, I found a Cuisinart panini press, and some Easter candy along with some hand written notes from a 5 year old to her uncle, and some photos of said 5 year with her family. Cute, but far from '56 Lincoln hubcaps.  So I called the seller, and told him about what I received, which was as surprising to him. Turns out that he had gone to one of those "we pack it and ship it" type places and they had actually sent me the wrong package. No worries, it's a mistake, everyone makes em.  I called the place, and spoke with the manager, who was very accommodating, but explained that he had just hired some new people, and he assumed one of them screwed it up somehow. I sent the Easter package back to him, figuring whoever was expecting a sandwich press and some family memorabilia was as caught off guard as I was to get old hubcaps instead. The manager told me he would figure out the screw up and find my package, or at the very least, compensate me. I wasn't worried, and I told him that the caps meant more to me than the money that I paid for them because of their rarity, so if we could find them, that'd be best.

A week went by. Nothing. Another week past. Still nothing. I kept calling, all the while keeping my mood light, since I've found that in most cases being polite will render better results than throwing threats and dropping F-bombs on the poor schmuck on the other end. Unfortunately, it was the same answer each time. The package seemed to have vanished. I still held off though on pulling the plug though... until about a month rolled by. In the mean time, I called the seller, just to keep him informed. I told him about the situation, and since by this point, I figured the caps were gone, asked what he would take for the other 4, (the ones that weren't quite as nice). He told me, "I feel terrible that this happened. You can just have them for the price of shipping". I argued, but he was insistent. I sent him a check for the shipping price since I knew how much it was from the first set, and he told me that he took them to the same place and they didn't charge him since they had lost the first set, so he tore up my check. This time the package did show up, and the caps are very nice. I was super excited to have them, though it was bittersweet knowing that if these were the "not so nice" ones, the ones that vanished were probably gorgeous. Regardless, to take his time to drop off the other set, and furthermore to refuse any money for such nice pieces was a huge good deed on the sellers part in my mind. That's not something you find much anymore.

Finally, sinceI had the decent caps, and more time had past with no word from the place, I decided to finally pull the plug and have the guy at the shipping place put in the claim to recoup my original investment. When I called he was excited to hear from me. "Oh man, I'm glad you called! I couldn't find your number, are your caps chrome with stars in the middle of em? Well they showed up at our other location downtown and they've been sitting there. I just wanted to make sure those are yours. Consider em shipped today." Yesterday, they showed up.Wow...Beautiful pieces.

So it's time to do my good deed. After almost 2 months, I got the parts that I paid for, but I also ended up with a second set of very decent caps free of charge. I'm putting them up for sale HERE and when all is said and done, I'm going to mail the guy who gave them to me a money order for whatever I get from them. I feel like that would be a good way to return the good karma, and it would just make me feel good to know that this story, even though it's on a very low level (I mean, let's face it, we're talkin hubcaps, not millions of dollars) could inspire a few people to believe, that despite all the shadiness you often hear about, there are still a few good, solid, stand up folks out there. 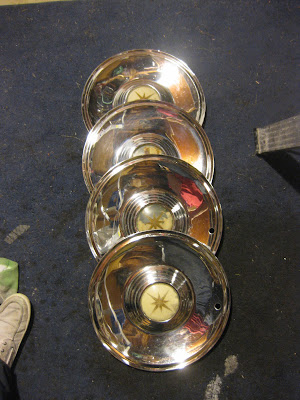 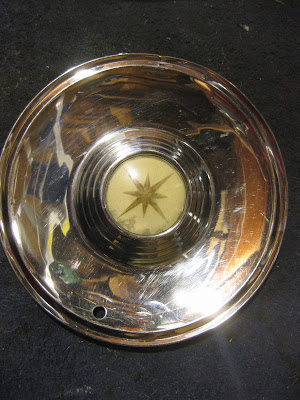 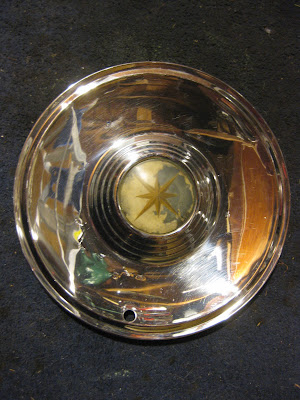 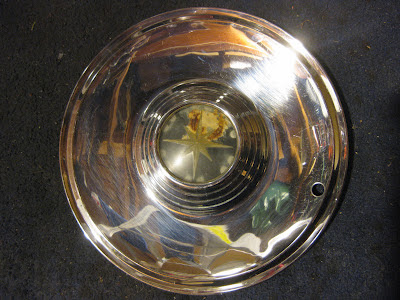 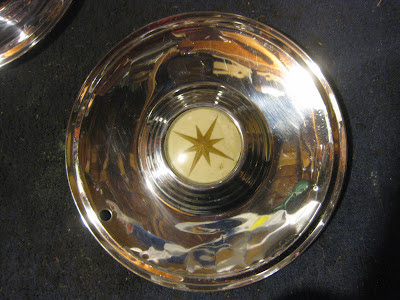