My buddy Matt never ceases to get me into trouble when it comes to hunting cool vintage go-fast goodies. God knows I have more projects than i know what to do with, and any money spent on ...well, anything else is money that isn't being saved for eventual paint jobs, materials, necessary parts, etc.
That said, after looking at his newly polished McCulloch supercharger, i couldn't help myself from looking into them.
A good quick history lesson on McCulloch/Paxton Superchargers:
http://www.paxtonauto.com/article.php?id=3

While perusing through craigslist i came across an ad for an "old big block mopar supercharger." outside of Chicago. With a vague description, and a fairly low asking price, my curiosity was peaked. I dropped an email with my number and received a call a few hours later. What the gentleman told me, was that it was a late sixties unit that was originally on one of Team Plymouth's (or Direct Connection maybe?) drag cars in 68 or 9. That car was wrecked and he bought the unit to run on his big block Duster. It's all there minus the crank pulley and belt (both of which seem to still be available from Paxton). It spins freely and worked when he took it off of his car before he sold it years ago. As far a the official-ness of the history, it's a cool enough story, but I don't plan on looking into it any further.
Needless to say after shootin the breeze and catching some Chicago Drag/street race history, I told him I'd take it.
Now... what the hell am I gonna do with a vintage big block Mopar Paxton super charger? Perhaps I'll just clean it up and sell it to finance some other, more pressing part of the automotive addiction, though I guess my 68 Imperial could use a little extra kick... ;)
Here it is... A bit Scruffy, but turns freely and has all the parts and hardware as promised. 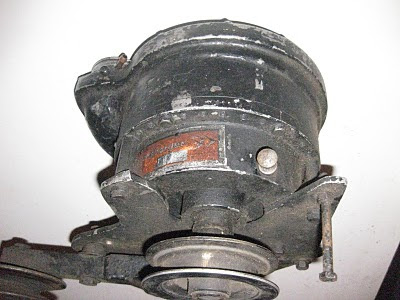 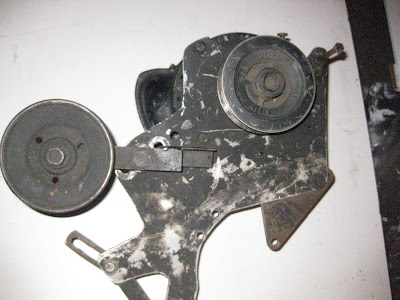 After a quick clean up: 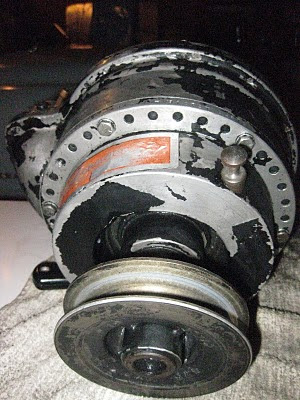